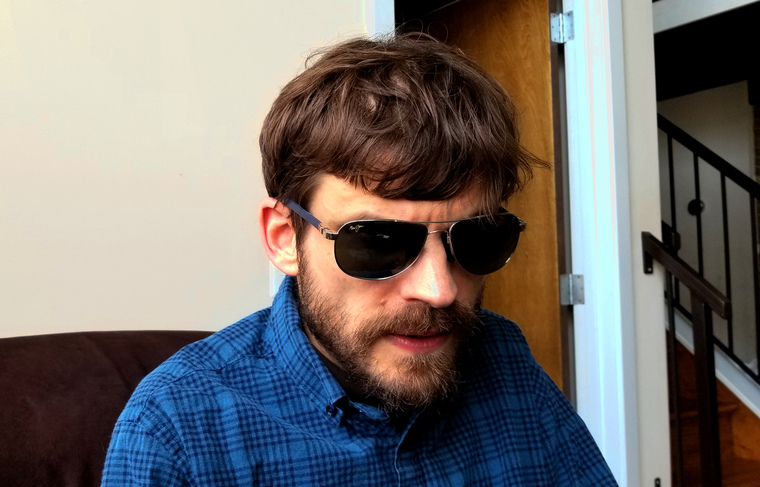 Welcome to my home page. I became blind at birth. I started programming computers at a young age. I also earned my general class amateur radio license, KA3TTT, a hobby to which I have returned with great joy. I practice Qigong and consider myself a Taoist. I use Linux as my desktop and Android as my mobile OS. I eat gluten-free vegan meals. For the rest you'll have to read my blog.

I have discovered vim, vi improved. For those who don’t know, Bill Joy, of Sun Microsystems, first wrote vi in the seventies to serve as a more humane alternative to other line-oriented editors at the time. Thirty-plus years later, people still use it, and now I know why. I love it. I feel born again.

Several years ago, I began writing my own editor called e, made for the blind. Now I feel weird setting that asside to learn vim, but I love it so much, and feel that the end result will prove worth it – the inspiration vim will give, etc.

I just wanted to let you know that if you need a rocking powerful unix editor, and felt intimidated, learn vim! It takes time, but you can really do some awesome things. I’ve only used it for a few hours. I still have to figure out how to get wordwrapping working the way I like, you really have to get down and dirty with it, but such goes life, such goes Unix.

A Question of Liability

I posted this after the event in question. I repost it now because of the referenced bout with godaddy, who I can now tell to SUCK IT!

Recently, Wesley Snipes received a three-year jail sentence for not filing a tax return. The accountants who he hired received stiffer sentences, but the question remains: should Wesley Snipes go to jail based on the bad advice of others? This brings up the issue of liability.

It reminds me of a recent bout I had with GoDaddy technical support. You see, I have to use a screen-reader, so javascript mouseclick events tend to not work as optimally. In this case, I refer to activating various functions within the GoDaddy control panels menu, a rather essential feature. I told the well-meaning tech this, and he first asked if I could get a sighted person to help me with my account. It royally angers me when people suggest this, as if a blind person has an army of sighted servants at all times. It doesn’t work that way, just so you know. He then told me that he could not alter my account, for “liability reasons.” This took the cake for me, as I just spent a respectable amount of money transferring my domains to them.

This started me thinking about liability. If I have to get a friend to help me modify my account, and his machine gets compromised without his knowledge, and some cracker gets my administrator information and uses it for ill, whom would I hold liable? Some would say the friend, or ultimately the cracker, but a closer look reveals the true culprit: GoDaddy, for not making reasonable changes to my account, and forcing me to go to a potentially insecure third party in the first place.

To apply this situation to the Wesley Snipes case, GoDaddy represents the accountants, my hypothetical friend represents Wesley Snipes, the cracker represents the IRS, and I represent the universe, randomly doling out self-modifications as I see fit. Consider this, and the answer to the Snipes’ case will become clear. Speaking of, while writing the first draft of this article, Windows abruptly closed for no discernible reason, and I lost the article. What does GoDaddy know?

I will repost a series of articles I wrote for my old blog, as well as on my blog at breakthematrix. I will start with this classic. Unfortunately,

I write this letter to express both my joy and concern. Your music brings me inspiration and solace. As someone blind since birth, I feel overjoyed that you have begun offering your concerts for digital download. As an audiophile, I feel overjoyed that you offer them in FLAC, giving a CD-quality file with lossless compression. My concern began as soon as I saw that you used an exclusively Java-based download manager. Doing this makes your site inaccessible to the blind, and limits your customer base in general. I would like to suggest that you offer an accessible version of your site.

I first discovered your music as I began college, in 1995, shortly before the release of Boys for Pele. Your emotional insight helped me get through that turbulent time. More recently, I rediscovered you after hearing American Doll Posse. I feel a renewed connection to your music and to a part of myself. I really wanted to attend the Philadelphia concert, but only found out about it two days beforehand, making it impossible – or at the least, highly improbable. When I read that you would begin releasing your concerts for download, I could hardly believe my apparent good fortune. When I saw that you offer them in FLAC, I felt like Goddess herself had blessed me. Your music has such breadth and depth. Offering your concerts in CD quality shows that you know and care about your audio and your fans.

As said, I became blind at birth. I started using computers around age seven, and quickly began to teach myself to program. I use a speech synthesizer to access my computers. It reads everything on the screen, and everything I type. This describes the ideal situation, such as under a text-based environment like Linux. Windows however presents a challenge to a blind user, since the crappy screen readers made for Windows can only do their best to interpret a visual environment. Think of the difficulty, confusion, and rage you have likely felt when trying to use windows. Now imagine doing that on a monochrome monitor with a shaky vertical hold and which goes blank from time to time for no reason forcing you to reset the computer. That approximates how it feels for a blind person to use Windows.

As though Windows did not present enough of a barrier, Java adds a whole other layer of complexity. Web sites can do things in real time either by running a program on the web server itself, or by running a program on the user’s computer. Running programs on the server does not inconvenience the user at all – they don’t even know it happens. Running a program on the user’s computer presents many issues not just to the blind, but also to the sighted. Something like Java actually runs a virtual machine – a program that emulates a separate computer. To the blind, it means that the screen reader has great difficulty, since the Java machine runs outside of Windows in a sense. Java also presents security risks which obviously effect both the blind and the sighted. Many users have Java disabled, and refuse to use sites which employ it extensively. Additionally, both the blind and the sighted feel confused while using such sites. It just effects the blind more rapidly and obviously, like many things in life. Either

way you look at it, you have limited your customer base, and I highly doubt anyone took the time to explain this to you. “Yes ma’am, they can download your tours. Now go announce it to the world!”

I tried going through the proper chain of command, in other words a single email address. I explained my problem and they wrote back a form letter. I replied again and they responded and apologized. They promised they would help me get the FLAC version of the Philadelphia concert. They did not know what to do and asked if I had any suggestions. Since they manage a download server, I figured they could just put the file on a private server for me to download, then remove it. They couldn’t do that, and suggested I get someone sighted to do it. This kind of suggestion always pisses me off! Blind people do not have an army of sighted people, waiting on them hand and foot. Additionally, I knew that the solution did not actually solve the underlying problem. I mentioned I have a server to which they could upload it. They agreed, and I created them a private account with a private directory. It felt wild to see the user “tori” logged in. I checked the directory during the transfer, and to my shock, saw the mp3

version of the concert. I quickly sent them email, since I know you have the excellent policy of offering the mp3 version until the FLAC version becomes available. I promptly received the following reply:

We will be unable to do the FLAC as an FTP upload from the support offices.

Just too large of a file.

concert, we are hoping you will enjoy the MP3 version instead.

I could hardly believe it. Frankly, this explanation seemed ludicrous. I also did not care for the brusque tone. They run a download manager! If I ran this thing, I could have done what I requested in a matter of minutes. Two hours later, I received the final email, the one that did it, the insult to the injury:

This upload has completed. Sorry the system has been giving you so much

trouble, but we wanted to make sure you got the show you purchased. Enjoy!

So there you have it. I couldn’t get anywhere. As a Philadelphian, I knew I had to do something real, as you so elegantly and humorously stated during the concert. As a Discordian, I believe that a Crazy Woman runs the material universe, and I knew that change would have to come from the top down – from a crazy woman! As a programmer, I knew what I had to do. I published this letter on my blog, in hopes that readers will use the social bookmarks to bring it to your attention. I hope it finds you. I also hope you consider instituting some changes to your download manager. They could even keep their fancy Java-based solution, I simply request a solution accessible to the blind, as well as to the security-conscious sighted. I know you will do the right thing. Kick some ass! Contact me if you need some help.